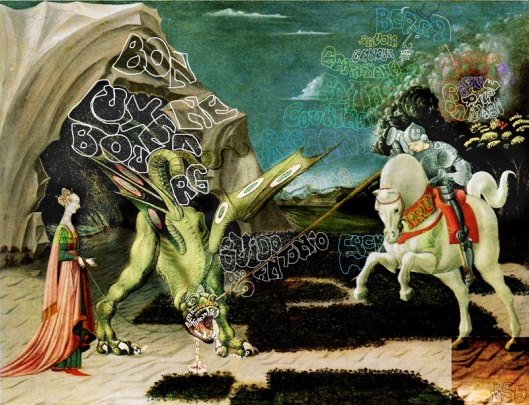 Paolo Uccello ‘St George and the Dragon’ (1455). All art is marked with the exact location of the hidden text.

The birth of Margareta was something of a scandal. Her father was Ayman, the son of Amadeus, Count of Savoy, and nothing wrong with that… the problem was that her mother was Amadeus’ wife. Ayman was having an affair with his step-mother.

Before long though, this was old news, and Margareta became one of the most eligible of maidens in Europe. Amadeus died, helped on his way by his two sons (who never forgave him for murdering their mother), and his eldest son Edward took the throne. Wherein lay a problem, because he didn’t seem able to produce a male heir – and this meant that Ayman, his baby brother, would be the next Count.

It was then that Orlando, Margareta’s elder brother got a job as a painter for the young wife of the King of France, and he began preparing the way for the marriage of the century, between Margareta and the son of the King’s cousin, Philip. The name her brother went by in France was Jean Pucelle.

But the son of the King’s cousin was a bit of a non-entity, no? Actually not, because Rolando had plans to fix that, too, and in 1328… according to a posthumous engraving of the King, Orlando and Philip murdered him. He was just 34, and his new bride had not yet produced an heir, and that meant cousin Philip was next in line. Philip became King.

The quid pro quo for Orlando was a tie between his sister Margareta and Philip’s son, Prince John. And John would be able to marry her in 1331 when he turned 12. In the meantime there was just one small detail to tidy up… that of Margareta’s ‘legitimacy’. She wasn’t even the daughter of the Count of Savoy, just his niece. But 18 years had expired since the birth of Count Edward’s only child, a daughter, so it seemed unlikely he would ever produce a male heir. Ayman was set to take over.

The solution was easy. In 1329, with the coffers of Savoy empty from his extravagances, Edward was persuaded by Ayman to pretend to die. And since the alternative was probably that he would die for real, he agreed, and retired using different names: ‘Villani’ to write chronicles, and ‘Lorenzetti’ to paint, which he did happily until a flea bit him in 1348, and he died of the bubonic plague.

With Edward’s ‘retirement’ in 1329, though, the last obstacle was gone. Ayman was not only a wealthy Genoese shipping magnate, merchant and merchant banker, but he was now also the illustrious Count of Savoy. His daughter had no equal in Europe, and so it was that in 1331 Margareta and Philip’s son were married, and by no less than the His Holiness the Pope himself, John XXII. The couple fell in love, and Margaret became pregnant with the young Prince’s first son, Edgar, who was born the following year. Edgar was to be John’s successor on the throne of France when he eventually died.

Jean Pucelle ‘Heures de Jeanne d’Evreux’ (1336): King Philip of France uses a stick labelled ‘Savoy’ to split the oak tree of Prince John (‘Jean’ in French) and Margareta’s marriage. Ayman’s new wife appears emerging from Philip’s rear, and keeps his tiny sprig of oak leaves from joining the rest. Bonne, her brother Charles, and Edward of Bar are pigs eating the acorns from the marriage, and Orlando promises vengeance. Giotto lurks as a shadowy menace to the king from the other side of the page.

But then it all went horribly wrong. Philip had a change of heart. If instead of Margareta, he had married his son to Bonne of Luxembourg, the daughter of the King of Bohemia (and potential King of Poland, and with a claim to be Holy Roman Emperor), he would be even better off. But there were three obstacles.

First was his promise to Orlando Fregoso, son of Ayman; second, his son John was in love with Margareta; and third, the marriage had been blessed by the Pope. The first one was no problem. Promises for Philip were mere words, said and unsaid to get what he wanted. The second problem was almost as easy – Prince John was only 13, and would do as his father told him, like it or not. But what of His Holiness? How to get him to agree to a manifestly bigamous marriage? No problem there either. Since the Holy Father resided in Avignon, surrounded by the King of France’s domain, and was dependent on him for His survival, He decided it was best to agree to the new plan, and to square it with God later.

And so, in 1332, Prince John and Bonne were married, bigamously – again by Pope John XXII, and Edgar and his family and future heirs had the throne of France stolen from them.

Under feudal law, it would have been the responsibility of Margareta’s father to exact vengeance, but Ayman had already been silenced.

In 1330 he had been persuaded to abandon the lady who had until then borne all his children, Maria of Brabant, and to marry instead Yolande, a lady from neighbouring Monferrat. In the event of the male line of Monferrat dying out, Ayman would take over. But that was not all. Yolande was well connected: the blood of the royal families of Castile and Aragon ran in her veins, along with that of the Emperor of Byzantium, the King of Serbia and the richest man in Genoa, Opicino Spinola. And her great great auntie was the daughter of the King of… France.

And so when Margareta was cheated out of being Queen of France, Ayman just looked the other way, effectively passing his responsibilities for vengeance to his eldest son, Margareta’s biggest brother. 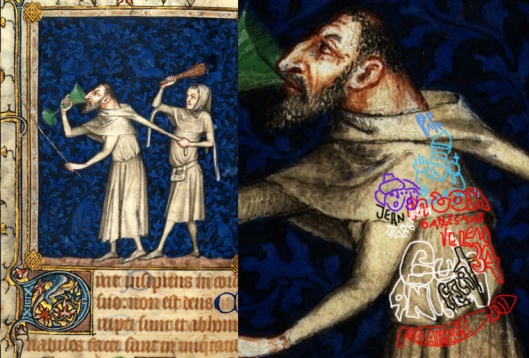 Jean le Noir (sister of Giotto): ‘Two Fools’ (1349): The character depicted here is Pope Clement VI, soon also to be poisoned for complicity in the murder of another family member. On his shirt, Giotto is named as the killer of Pope John XXII: ‘Ioannes XXII muoia, Guido Antonio (Giotto) fecit’.

And so it was that in 1334, Giotto became an assassin. He brought forward His Holiness’ chat with God by using poison. He promised the same to King Philip VI of France, and to the bigamous Bonne of Bohemia, but in so doing, the name ‘Giotto’ had become hazardous. And so in 1337, as ‘Giotto’, he ‘died’.

But the man himself didn’t. By 1350, he had fulfilled all three tasks, and Europe was then plunged into a vendetta that lasted 250 years, and resulted in the overthrow of thrones, and the agonising deaths of over one hundred of the most famous people in European history. The theft of France would have the direst of consequences for all involved.