Jan van Eyck ‘The Arnolfini Wedding’ (1434). Art has been marked to show the exact location of the hidden text.

There is something very wrong with what we were told about this famous painting. It is said to be one of the finest examples of Renaissance art to come from Northern Europe, depicting the merchant Giovanni Arnolfini and his wife, who are dressed in the most extravagant of clothes, amid the opulence of their home in Bruges. Some senior historians go on to say it records their marriage. And to quiet fears, they say that despite appearances, she is not pregnant, women were depicted that way to show their potential, not their current situation – or that it was a fashion of the time, which it wasn’t.

On the other hand they also tell us that Giovanni Arnolfini was not terribly successful as a merchant, but they don’t then say how he could afford such expensive attire or room furnishings, not to mention a dog of the most prestigious breed. Nor do they explain why the lady is not standing with eyes downcast, as ladies were in those days required to. And as for the pregnancy, Jan was renowned for his refusal to distort reality in order to turn features into symbols, so why then show a huge bulge if there wasn’t one? Worse still, why is the word ‘bastardo’ written across the lady’s belly, and the ‘V’ for ‘Vendetta’ sign on the man’s robe? 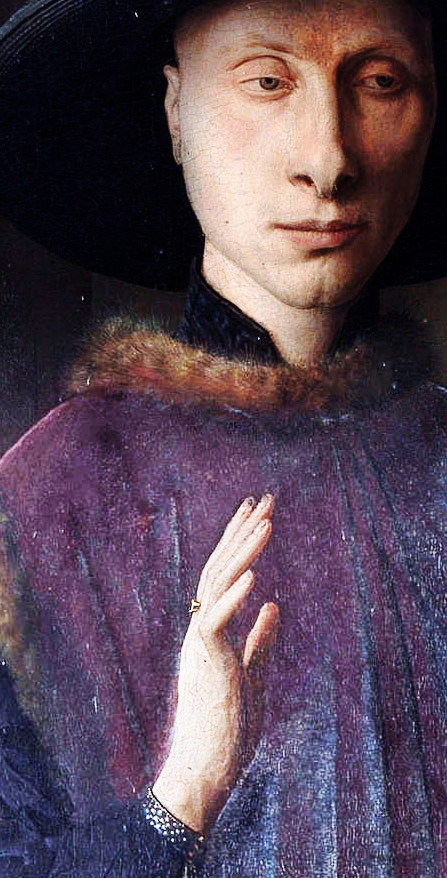 Jan van Eyck ‘Arnolfini Wedding’ detail. Can you see the ‘V’ for ‘Vendetta’? It is just to the left of his hand, and there is a sword plunged through the middle of it. And if we examine closely we find the name of ‘Antoine’ there, too. And just by way of confirmation, there is another ‘V’ on the bridge of his nose. The Duke had grievously offended Jan, and the artist was out for vengeance. There was a score that had to be settled.

And another anachronism… it is recorded that in the far past, the ‘Arnolfini’ Marriage had a frame, and that on the frame there was a quote from Ovid. This, we are told, is proof of the good education of the Arnolfinis, but if one troubles to read the quote in question, and see which book it comes from, there is a better explanation. The quote on the frame read: “See that you promise: what harm is there in promises? In promises anyone can be rich.” A cynical quote from a cynical book about how to seduce a lady by falsity and deception. So why ever would Mr and Mrs Arnolfini want such a contentious quote on the hugely expensive record of their marriage? The old story just does not hold water.

But a bigger snag awaits, regarding Jan himself. He was the court painter to the Duke of Burgundy, perhaps the richest man in Europe. So how ever did the Arnolfinis persuade the Duke to release Jan to paint a couple of not terribly successful merchants?

But even that inexplicability is small compared to the next. Why on earth did the Duke send, not a diplomat or a senior family member, but of all people Jan, to negotiate with the King of Portugal for the hand of his daughter? And when it was all agreed, why he would send him again to accompany her from Portugal to Burgundy? In those days painters had little more prestige than plumbers, so please tell us… why?

Arnolfini portrait by Jan, and two later portraits of the Duke of Burgundy, Philip III, by Rogier van der Weyden

And if the conventional story were not already shot full of holes, then one would need to explain why the couple in this painting look extraordinarily like Jan’s patron, the Duke of Burgundy – and his wife, Isabella, the Infanta of Portugal. And yet worse for the story peddled for the last five hundred years, why are the names written all over the two people ‘Isabella’, and ‘Filippo 3’?

Arnolfini portrait by Jan, and two of Isabella, by van der Weyden

The reason for all this, of course, is that the couple really are Philip, the Duke of Burgundy (well able to afford the luxuries he is surrounded by), and his wife Isabella. And yes, she is pregnant: they are celebrating the imminent birth of their first son and heir, Charles the Bold, in November 1433.

But why the cynical quote on the frame? Ah, well, that is because Philip knew the book in question: indeed, it was his guide. He promised Isabella the Earth, and then when they were married, told her he had no intention of being faithful, and from then on usually had several women on the go at once, and rode with them on his horse through the streets. In promises, indeed, anyone can be rich.

And the downcast eyes? From the Infanta of Portugal? The daughter of a King should cast her eyes down for a mere Duke? Oh no. Not this Infanta.

Everything in the old story was wrong. It’s not the Arnolfinis. It’s not a wedding. She is pregnant. We don’t have to concoct specious fictions about why the lady is so bold with her eyes, and we no longer have to mention that there was a learned quote that used to be on the frame, but keep quiet about what it said. The quote was appropriate, for Duke, Duchess, and the artist. (For the artist? Just wait!)

Well, at least the ‘Arnolfini Wedding’ is still the jewel in the crown of early Northern European Renaissance Art? Er, actually no. There was a reason the Duke was referred to not in Flemish, but in Italian. The name written all over him is ‘Filippo’, and sometimes ‘de Borgogna’ too. It was because ‘Jan van Eyck’ was just an alias. He wasn’t Flemish at all. He was Italian.

If we look more closely at this and all his other paintings, we find that he tells us his real name. He was Giovanni di Niccolo Arnolfini, known to Kings and Princes across Europe, and with family connections yet better than those of the Duke himself. And that is why Jan was trusted as a diplomat.

Is that all? No. I’ve been holding something back. ‘Giovanni di Niccolo Arnolfini’ was not Jan’s only Italian alias. He had another one, too. A very famous one. If we look at his temple on all his self portraits, we find the name ‘Masolino’. And this is why even though Jan is credited with having invented oil painting, Masolino was recently shown to have been using oils ten years before him, in Italy. Jan and Masolino were one and the same person.

Close up of Isabella’s ‘potential fertility’ in the ‘Arnolfini Wedding’

But that was not what I was holding back. The best part about this painting, indeed, the very reason it was painted, has to do with that large ‘V’ drawn on the Duke’s cloak, and the little one on the bridge of his nose. It is the ‘V’ of ‘Vendetta’. Jan was seeking revenge.

And that too is why it says ‘bastardo’ across Isabella’s bulge. The child was not Philip’s, it was Jan’s. Charles the Bold was Jan’s revenge. Philip had a child (Antoine) by Jan’s first wife, Costanza, back in 1421, and although it took over a decade, justice was served.

The next Duke of Burgundy would be Jan’s son. And that is why there are two interpretations of the ‘signature’ on the wall. It says not just ‘Jan was here’, but ‘I and every Eyck was here’… And it also explains why the two mischievous stains on the bed cover say ‘vend’ and ‘etta’.

The truth is so much better than the story we have been told! As Mark Twain said, ‘Fiction is obliged to stick to possibilities: Truth isn’t.’